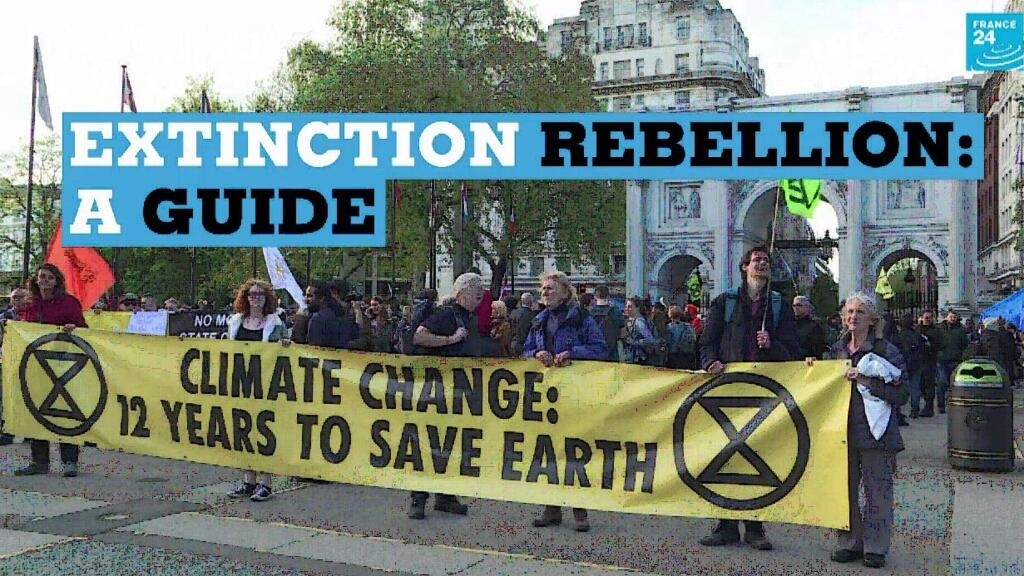 The Global Climate strike of last September 20-27 is spearheaded by the recently formed
Extinction Rebellion or XR as it is known which lures children to skip school for the sake of illegal
action on the streets. It is led by 16 year old Greta Thunberg from Sweden.

It is doubtful if she fully realises that it is the rich and famous who are funding this climate fraud. Warren Buffet, the Gettys, along with George Soros, Rory Kennedy the daughter of Robert Kennedy and the CEF the so called Climate Emergency Fund which the Guardian has reported as receiving EU 500, 000 already with ten times more to come.

It should be pointed out that this is not a grass roots rebellion. It is a well orchestrated propaganda campaign to create a political climate to accept an eco-fascist dictatorships.

While globalists like George Soros (pictured, above) fund this XR organisation a more sinister picture has emerged with the report by the former head of Scotland Yard Counter Terrorism Command Richard Walton.

His 67 page report reveals that XR has a “subversive” agenda rooted in “political extremism of anarchism” rather than just campaigning on climate change!

In his report Walton says that he uncovered evidence that XR leaders advocated “revolution” to overturn capitalism with mass protests and law breaking aimed at achieving a breakdown of democracy and the state-an intent that many of its middle class gullible followers and even celebrity backers are unaware.

How many church members would approve of their hard earned cash being given to an organisation whose stated aim is to bring down the government! (financial contributions show Christian aid has given XR thousands of pounds Richard Walton`s report is published by Policy Exchange London.)

The globalist George Soros is funding extinction rebellion. A threat to our UK democratic
government at Westminster. See:
notalotofpeopleknowthat.wordpress.com

The psychotic bankers and the eco fascists work hand-in-hand.

THE CLIMATE FRAUD EXPOSED!
Psychotic bankers using children for their CO2 reduction policies. What could be more low than using innocent kids for their evil aims.

On the eve of  the UN Climate Action Summit in New York on 20 September 130 banks under the leadership of the governor of the Bank of England Mark Carney declared their support for the discredited Paris Climate Accord.

The measures of which will eliminate fossil fuel production and industry and manufacturing worldwide in support of their green energy technologies. The demand of the UN communist inspired Paris Climate Accord is to shut down threequarters of the world`s thousands of coal fired power stations by 2030 a policy which will send infant mortality up and lifespans down in the developing world due to lack of proper mains electricity.

Millions will die as a result. The increasing cost of electricity due to subsidies for “green” technologies like renewables which would never survive without tax payers subsidies will lead to increasing deaths even in the developed west.

In Germany tens of thousands of consumers have to sit without electricity for long periods as a result.

However revolt is growing in France, in Germany and in Europe generally. The eco-fascist system with its anti-industry, anti population basis is being increasingly challenged.

The 50 year old eugenic spawned pestilence has now been revealed for all to see. It is to choke off all investment worldwide which is not “green”.

This will mean a windfall for the “green” bankers pulling in masses of liquidity with the possible collapse of the financial system. At the same time investments needed to sustain life are withdrawn and the eugenicists dream of a depopulated world becomes a reality(in GB already 4000 food banks, 280000 children homeless!),

If you think this is not possible think again. Reports indicate that no international financing for coal fired plants for energy starved nations is available apart from China.

Over 30,000 graduate scientists have signed the Oregon petition stating fossil fuels will not harm the environment http://www.petitionproject.org

Over 1000 international scientists have signed a US Senate report stating they dissent from the theory of man made climate change. Read the Full Article

General Secretary of the World Meteorological Organisation(WMO) says that the alarmist narrative on climate change has gone off the rails and criticised the news media for provoking unjustified anxiety. (London 6 September 2019).

Speaking to Finland`s financial newspaper Talouselama on 6 September Petteri Taalas called for cooler heads to prevail, saying that he does not accept arguments of climate alarmists that the end of the world is at hand. He also spoke of the dangers of green extremism. He called for the media to allow a broader range of opinion.

Mind blowing heat. Kept quiet by the devious lying press. The NOAA fraudsters and the BBC are misleading the public with the help of their lying media friends, people with no knowledge of climate science.

Deaths From Climate And Non-Climate-Related Catastrophes 1920-2017

About the author:  Terri Jackson MSc MPhil MInstP is a graduate physicist in Northern Ireland working in various areas of physics, energy and climate. – for seven years a Senior Fellow of Principia Scientific International. Terri has served as a member of the Women’s Engineering Society and on it’s Council for a number of years. Terri has taught physics at Belfast Institute of Further and Higher Education for 30 years. She was not only the Founder of the Energy Group at the Institute of Physics, London, but also Director of the Independent Climate Research Group, Northern Ireland and London. A further distinction is that Terri was the energy researcher for former First Minister of Northern Ireland, Dr Ian Paisley (now Lord Bannside)